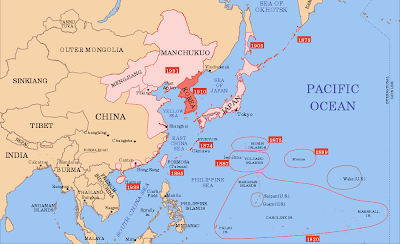 일제 강점기 is the hangukmal phrase Koreans often use to refer to Japanese occupation from August 1910 until 1945. This year marks the 100th anniversary of Japan's forced annexation of Korea. Here is a little Wiki background and the map to the left represents Korea in the Japanese Empire in 1939. (Click on the map to enlarge it.)

My favorite Korean history book, at the moment, is Bruce Cumings' Korea's Place in the Sun: A Modern History. I recommend it: easy to find, engrossing and provocative. Anyway, it's difficult to find good modern histories for Korea. The Wikipedia page, understandably, needs a little editing. Overall, it's a fair overview of dates and events.

Japan has never wanted to be transparent about occupying Korea and continues to do whatever it can to hinder honest research into Japanese exploitation of Korea and Koreans. This is something I knew a little about before coming to Korea. Very little. Well, to be honest, I knew that Japan had occupied Korea until 1945. And this explains, I think, the detail most educated Americans know about Korea. Dates and names. Nothing more.

It's a shame because Korea and the United States are much more dependent on one another in many more ways than Americans would like to admit. Koreans don't like to admit it either as they have struggled throughout their history for self-determination.

I can't say that it's easy to learn. Much of the literature in English at Korean bookstores is outright crap seemingly authorized by government-friendly publishers and written by expat "journalists" and "historians" who must enjoy a little celebrity for kissing middle-class Korean ass. It's also more than a little patronizing to cast modern Korea as a classic, capitalist success story: placing Koreans in the role of a Horatio Alger hero who's rough, dirty, scrappy but works so hard that we all know he's going to win by the end of the story. I HATE THAT SHIT.

Sorry about the frank language, but some of the books are truly embarrassing and intellectual trifles. I don't want to get into historiography and dialectics here. I did want to share with you, on the other hand, three engaging articles from a Korean newspaper I enjoy reading, The Hankyoreh. The link is to the English language, online edition.

Yesterday, The Hankyoreh published the third in a three-part series of articles in observance of the 100th anniversary of Korea's annexation by Japan. The series is called "Traces of Forced Mobilization". The articles handle a particularly nasty part of Japanese occupation, the National Mobilization Law. After 1939 and until the end of occupation at the beginning of World War II, Japan mobilized (conscripted) over 5,000,000 Koreans as laborers in Japan and Korea, and elsewhere. Over 600,000 Koreans were taken to Japan. An accurate number will never be possible, but between 200,000 and 800,000 Koreans died as a result of forced mobilization. After the occupation, tens of thousands of Koreans were left as stateless refugees in what used to be the outlying ares of the Japanese Empire. (Again, an accurate number will be hard to learn.)

The Japanese attempted what many scholars now refer to as "cultural genocide"; the occupiers purposefully, brutally and crassly supressed Korean culture. It's aspects of occupation and war over the last 120 years that directly led to the revival of Korean Nationalism that so many foreigners complain about confronting while they live or visit Korea.

In the comments section, feel free to offer any stories you may have about family & friends; or, if you're learning about Korea, anything you'd like to discuss about the anniversary and topic.

on the fyi front:

also, the japanese, throughout their captured territories, took local women to serve as 'rewards' for their soldiers. while this happened everywhere, korean women were exported quite a bit.

the documentary appears from time to time in seoul--it is well worth watching if you can find it.

I thought I'd post something about forced mobilization.
Most foreigners I know in Korea are aware of comfort women and sex slavery and several other high profile Korean causes but don't really know the history of the 19th and 20th Centuries in the region.

In addition, I wanted to highlight The Hankyoreh, which is a fabulous paper with an English Internet version: a paper that is running wonderful articles about the occupation all year.