Asshole of the Day: Pope Benedict 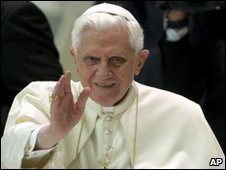 Critics of the UK's Equality Bill claim it "may force churches to employ sexually active gay people and transsexuals when hiring staff other than priests or ministers." It's a common claim against equal rights legislation: corporations and religious organizations worry that such legislation will force employers to hire homosexuals against their wishes. Of course, that's unlikely; very unlikely. Moreover, statements like it are the worst kind of propaganda because they are designed to encourage dissent by tugging at voters' hatred and fear of difference.

What legislation like the proposed Equality Bill does accomplish, in fact, is to attempt to prohibit employers from discriminating against qualified employees and applicants based on their sexuality. It provides a mechanism that will permit legal action against known bigots. This is markedly different from forcing organizations to hire homosexuals. On the other hand, it does insist you shouldn't say no to a new hire simply because a person is a homosexual.

Christian organizations always fret that subversive members of the population, like homosexuals, will rush to apply for lay jobs at Churches when and if legislation is passed making it illegal to willfully discriminate. It's a rather silly, though harmful, fear.

The Pope gets all metaphysical about "natural law" (Catholic code for Catholic Doctrine on Natural Law.) Benedict claims that equal rights legislation "actually violates the natural law upon which the equality of all human beings is grounded and by which it is guaranteed." I absolutely HATE this kind of crap.

What does an employer lose if he or she hires a homosexual? What is lost? No discernible economic value, that's for sure. And I would claim that no spiritual value either. What the Catholic Church does is usurp spiritual authority, interprets it for you, makes it rather human and bureaucratic, ties it to one of several medieval to ancient traditions, and calls it good Doctrine because the Vatican says it's so. I call bullshit on that. The Church revises Doctrine all the time.

Benedict is certainly not the guy to go to when considering Human Rights.

Once again, the leader of the Catholic Church shows that he cares not one bit for human rights.

ADDED at 1546, 2Feb09: Let's be honest. Looking at my first citation from the BBC article, which is a BBC journalist's paraphrase of religious organizations' claim against the Equality Bill, we can see what religious organizations are concerned about. It's not necessarily that an employee might be homosexual, it's that he or she will be a sexually-active homosexual. It's not really a debate I relish having with a religious zealot: Does homosexuality violate natural law? But Christian leaders are claiming 1) that practicing homosexuals are violating natural law and 2) that people who violate natural law don't have the same human rights as other people. It's nonsense; it's wrong; it's in every way not Christlike; and, finally, it's contradictory to the Pope's argument about natural law and equality.
Posted by Unknown at 2:54 PM