Why do I care about "these issues"?

An anonymous commenter wants to know why I care about "these issues." I guess the commenter thinks I am pretending. At any rate, he posted several times. The same question.
I suppose I take the time to write about "these issues" because I'm engaged with Korean culture and history. I'm learning the language. I have a passion for it. And I tend to study and write about the things I love. But you know this about me already. Don't get me and my motives confused with your messy life and its uncertain future.
Let me try something. My intentions are absolutely unlike my persistent stalking lurker's, who has an unfortunate obsession with sex, finding it easier to take aggressively flirt with women here than at home. If you strike out in the social scene here, you can walk down the street and pay for it. (What is it about straight white guys that they can't see bigotry and oppression in their prurient obsessions with Asian women? They're so geeky, liberal, post-modern, post-colonial until it comes to sex.)
I'm not guessing, am I? No, I'm not. After all, you're really not at all that anonymous, are you? You are aggressive, petty, mean, insincere, and the more I consider it, racist. But the latter might just be a pose you've adopted to try to engage me with your anon comments. I doubt it, but I'm still willing to give you the chance to change my opinion. I hope you're just an obsessed and self-loathing prick and not a racist as well.
Look, you've finally engaged me. But I won't publish your latest comment. And I've disabled anonymous commenting. I won't approve your future comments without a real ID attached. What's the point? After all, I think you should stop all of your creepy lurking and come out in public to debate the issues.
I'm more than happy to debate anything, if you're able to put your name to it.
Anyway, to honestly answer your question. I'll tell you one reason why I love writing about "these issues" online. It's hard to do all of this studying and not have some outlet for it. Most of my foreign friends are in Korea to teach and stay away from home for awhile while working. Many try to learn a little here and there about Korea. It's hard to: after all, we're all working hard while under contract.
As an American, I believe I have a duty to learn about the peninsula, its people, its language, and do what I can to live a thoughtful life that addresses my desire for social justice while I am in Korea. The United States, as you know, is so entwined with the Republic of Korea and yet the overwhelming majority of Americans know fuck all about what Korea is about. And from what I can tell, most don't ever intend to learn. It's not necessarily meant in a bad way;nevertheless, it's a fact.
So, I write about what I'm learning and try to encourage discussion. I also read many of the more thoughtful and thorough blogs by Koreans (written in English) and foreigners in Korea. I just want to be part of the wider and developing discourse. I want to learn from my contemporaries as well as from the books and texts I read online. I do consider Korea my home. I feel like I'm accepted as a guest by everyone I meet. Ultimately, why not participate in the culture?
All that good will and good intentions aside, I have to admit that I get the biggest kick out of how many white boys can't handle it. It's the race traitor in me, to be sure. White men can get annoyed when you write about race and culture. And I am happy to be a part of the cultural discourse that continues to purposefully annoy them.
I'd hope you'd be in the former group, actively engaging in useful discourse about Korea. However, I'm more than willing to accept you into membership of the latter group of cretins who everyday are becoming less relevant in a world aggressively becoming less interested in the cultural politics of decaying Empires.
ADDENDUM:
I forgot to post the question. I already deleted it, so in fairness I should say this isn't a cut and paste quotation, but from my memory: "Gary, are you pretending to care about these issues [to impress your girlfriend]."
You see, I am marrying a woman who isn't white. And because I'm doing that, I'm not permitted to critique white masculinity in Korea. And I will get similar, if not more intense, treatment back in the United States. I guess because I'm guilty of marrying a non-white woman. Apparently, if I were to marry a white woman, I would be permitted to freely criticize whomever I choose. I guess marrying into, in my case, Korean culture is cheating and is not permitted.

I'm reading Michael Breen's The Koreans: Who They are, What They Want, Where Their Future Lies (Thomas Dunne Books, 1998. Revised, 2004.)

The book is sold as "[a] splendid work of explication and analysis" for and about Korea and Koreans. If I were Korean, I'd hate these books.

Maybe it's an easy critique to make, but Breen's writing is one moment fair and the next paternalistic, patronizing. He's aware of this and the book, so far, has several sentences sprinkling his intent not to be that way. When a writer has to tell his readers what he's not intending to do, then he needs to reconsider focus, direction, or genre. To be fair, much important work in writing represents an author's failure to accomplish his or her intent.

I don't mind anecdote and memoir, nor do I mind the critical analysis that often accompanies firsthand accounts of other cultures. Breen's observations are not trite. They are complex and careful, though often digressive.

As a reader, I do mind when interesting and anecdotal travel writing poses as vital cultural discourse and attempts to sell an author's illustration and caricaturization of an entire culture to his readers as authoritative vis-a-vis the author's own culture's view of the world and the subjects in his work. Breen is offered expert status on Korea and Koreans because he's an expat journalist who has extensively covered Korean business and politics. I'll write more about this in the coming days, but I can't shake this: when a foreign business and politics journalist claims he knows about the everyday lives of everyday Koreans, he's completely full of shit and gravitas.

It's not that foreigners shouldn't write Chapters on Korea, as Breen does, entitled "Korean Heart". Do share with your Western readers what you've decided is so complex about Korean passions and intellect: how, even though you admit you can't understand it, you have something valuable to say about it. Nothing at all wrong with the attempt. What's improper is the uncritical acceptance and implementation of a mindless binary about Western and Eastern consciousness that itself is based upon a complex series of mutual misrepresentations and generalizations about several cultures. It's as if the binary opposition is in itself an excuse for painting not one but all cultures with broad brush strokes for the purpose of making some rather simple points about other people appear poignant and complex.

Sounds like I am really having a go at Breen, doesn't it? I don't know about that. I'm dissatisfied with the state of intellectual discourse in books about Korea. I think he's a talented writer. It's clear he cares about Korea. I suppose I don't know what to do with his book. I guess I find it intellectually lazy. I'm reviewing it right now and yanking passages to illustrate my points. So, more to come shortly.

As I get back into gear, here is a blog worth reading:

Stuff White People Like To Do
Posted by Unknown at 8:46 AM 0 comments

Where you should be this Saturday 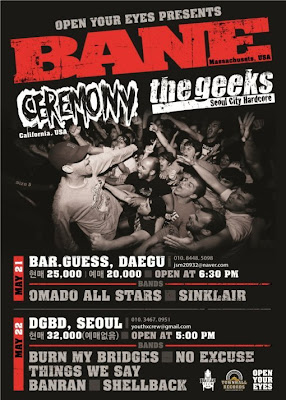 I have been focused on language study for the past several weeks. My Seoul National University class was a lot of fun. My next class begins in two weeks. I'm looking forward to it. I'm going to get back to posting here several times a week. Sorry for being absent.
Posted by Unknown at 12:45 AM 0 comments